The 60s are alive once more through the fashion trends and set designs quintessential to the decade in Edgar Wright’s Last Night in Soho. A dark, captivating story with suspenseful twists and a great cast. Its plot makes this time-traveling thriller an underdog movie amongst similar billings.

Eloise (McKenzie) is a sheltered country bumpkin who travels the same path her dead mother once did; to be a fashion designer. Raised and encouraged by her grandmother Eloise seems detached from the modern, everyday world. Yet to make it as a fashion anything in England, London is the place to go. So, Eloise leaves home to attend the London College of Fashion. Eloise struggles in the dorms, becoming so downtrodden by the disillusionment of reality she leaves the dorm to rent a room off-campus. The writer’s choice here is to move the story along, but it strips Eloise’s character of the ability to grow as a person. This film’s dark unlying theme is a women’s lack of choices or autonomy.

Once settled in her new space, she discovers something, like a portal to Narnia or Wonderland. Eloise is enveloped and inspired by the 1960s vivid glamour. The mysterious singer, Sandy (Taylor-Joy), and her manager, Jack (Smith) in her dreams until it turns foul. Are they dreams, memories, or time travel? Why does she stay when most people would run away screaming? Wright goes back and forth; he isn’t entirely clear. Nor is it clear if Eloise is an observer or participant in what she sees. It’s never explored and can seem like a plothole that should have been addressed upon first viewing. However, Wright likes to blur certain aspects, so maybe there isn’t one correct answer. This film is psychological.

The movement between Sandy’s actions and Eloise’s observations is (cinematically) well shot and edited. This facilitates in blurring reality and the dreamscape of past events. The lighting and music also cement the tone and pace of a given scene and the film overall. Edgar Wright makes it easy to watch but, in reality, involves a lot of forethought, takes, and editing. I applaud any movie with a detailed, rich plotline that doesn’t cause hiccups or continuity errors. Last Night in Soho is packed with details and aspects that make the characters’ lives plausible. None more so than Sandy.

Anya Taylor-Joy has had a busy last couple of years with a wide variety of roles to her credit. This movie is another notch off of genes she can pull off. While Eloise is the vehicle that gets us to Sandy, Sandy’s character is the star of this film. Her journey connects to everything in this movie—the twists and emotional resonance fuel the narrative.

Last Night in Soho isn’t a horror film. It’s psychological, thrilling suspense with layers. I appreciate a screenplay that’s written and cast well and was not disappointed. Anya Taylor-Joy, Matt Smith, and Diana Rigg are all wonderful in their respective roles in this film. Each brings professionalism and gravitas to their character’s places within this movie. A perfectly cast, well-directed story of ambitions, the spotlight, and the nightlife of Soho in the 60s makes Last Night in Soho worth a place on your watchlist.

Based on: Novel by Patricia Highsmith

“I always thought it would be better to be a fake somebody than a real nobody.”

Sometimes it’s difficult to look back at periods and view a story through the lens of ‘that’s how it was.’ To accept that people were so gullible, to accept things flat out. And yet, that’s how author Patricia Highsmith wrote the characters for her book, the basis for this film. A viewer needs to understand this about The Talented Mr. Ripley and set their expectations accordingly. If you can go along with the story, you’ll find it more enjoyable. Usually, I can’t abide such things within a story or plot because I see it as a sign of lazy writing. Still, the acting by this phenomenal cast makes up for it.

Tom Ripley (Damon) is tasked through a stroke of fortune, via a white lie, by a Mr. Greenleaf with going to Italy to bring back his son. The boat-loving playboy Dickie Greenleaf (Law). What single person passes up an all-expenses-paid trip to Italy?

Once there, he, of course, must keep up the lie. Tom is adept at lying and convincing others of his wants and intent, which comes off as more unbelievable as the story progresses. Despite that, Tom comes off as smooth but vulnerable, exuding this innocence about him that he uses to get people around him to include him. Things unravel when he’s left out or stops feeling like he’s in control when others get in his way. Then-then the psychopath in him is viewable as if the mask falls away at times. Matt Damon does an incredible job of portraying such a character with all the nuanced layers required; he makes it seem effortless.

Dickie Greenleaf is a spoiled, temperamental scoundrel. Or a selfish American prick. Even with his womanizing, drinking, instant need to be amused all the time, Jude Law still makes him likable. He brings an energy to the character that is an absolute must. Law and Damon together are like tea and water; they belong together.

Philip Seymour Hoffman is a presence in any film. As limited as Freddies’ role is in The Talented Mr. Ripley, you understand he’s not stupid. He and Dickie are tight, and he smells the bullshit coming off Tom from a mile away. Hoffman is a solid supporting character matched only by the always incomparable Cate Blanchett. As Meredith, Cate is effortlessly the embodiment of a jet-setting, fashionable American heiress of the 1950s. Meredith gets more character development for a film with little female presence than Dickie’s girlfriend, Marge (Paltrow). While Meredith is off doing her own thing, it’s easy to see she has an active social life that doesn’t appear to hang on the whims of men. Marge is either around Dickie, Tom, or Freddie. She interacts with no one else of consequence, making her seem shallow. When her world falls apart, it’s disgustingly apparent Marge has no one else to talk with or turn to. She’s a non-married woman in a foreign country depicted as naive and hysterical with no redeeming character arch. 1950s women were treated a certain way, with limited expectations; as such, Marge gets shafted as a character with too many female stereotypes.

So, within this mix of liars, brats, and sycophants, we have an intricate web of lies and deceit dressed up as the high life of the rich in beautiful Italy. When the police get involved, Tom’s lies become like a conman’s shell game to keep anyone secret of the moment in play. The question becomes can he keep it up? Will he get found out? While The Talented Mr. Ripley isn’t a full-on suspense film, it has those moments. The slow burn keeps you wondering how it will all play out for Tom, who will do anything to avoid going back to his own life.

What I find to be more beautiful or satisfying than the stunning Italian settings is the ending. Noting about the film is neat, and neither is the ending, and it’s brilliant for that. The Talented Mr. Ripley is overall a well-told story with a good plot, depicted by a fantastic set of actors that is worth a place on anyone’s watchlist. 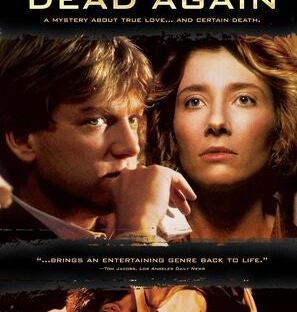 What if there isn’t a heaven or hell to go to when we die? What if we come back as something else, someone else? If it was all fate. Would you change how you live your life? In Dead Again, it doesn’t matter whether you believe in karma or not; it happens anyway.

To appreciate a story like this, you need to be open to reincarnation as a plot vehicle. The story moves back and forth between two events in Los Angeles, CA, one in 1948 and the other forty-years later. It’s easy to follow along with the shifts because the past appears in black and white. While this wasn’t the original intent of the director, it works. Post World War II, the noir look is quite fitting.

A married couple, Roman and Margaret Strauss, have issues with jealousy, money, and job security—those are attributes relatable to many marriages. The majority don’t end in murder, however. The ‘what’ and ‘why’ questions to be answered in this film are intertwined. It’s the unfolding of the past events and how they relate to the present that provides answers.

How do you get answers about a past life? You get hypnotized by an opportunistic antique dealer named Franklin, played by the amazing Derek Jacobi.

Roman Strauss/Mike Church, a musical composer/private detective, is played by Kenneth Branagh. Margaret/Grace, an orchestra player/artist, with amnesia is portrayed by Emma Thompson. Their depictions of their respective characters are well performed, infused with genuine chemistry.

Robin Williams plays Cozy Carlise, an ex-therapist turned grocery clerk who gives advice from a walk-in cooler. His character provides Mike with insight and advice that allows viewers to follow the theme that karma plays.

The well-developed characters, plot structure, pace, and tone of this film mesh together with Patrick Doyle’s musical compositions. It helps the entire film’s mood despite the vast differences in cultural tastes between the late 1940s and early 1990s.

Some may find the premise behind the plot ridiculous. Many will not. It’s refreshing to see a non-Christian based religious-belief system represented. It reaches out to more than just the ideals of the West. I first saw this a few years after it came out, and I wasn’t more than thirteen. Before this film, I had never heard of karma, past-lives, or reincarnation, so it expanded my brain to other notions than what I had been taught.

That insight is a positive takeaway. The downside is I probably shouldn’t have watched the end of this film, then. I was squeamish. As an adult viewer, the climax scene isn’t a shock, yet it’s not disappointing either. No one predictably says that “karma is a bitch,” but it’s certainly implied.

If you like mystery or thriller stories and try to figure out the ending before you get there, this movie should make it on your watch list. It’s an under appreciated chestnut of cinema worth your time.